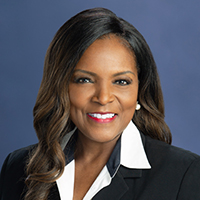 Upon completion of her bachelor’s degree, Dr. Lenton-Gary began working as an Environmental Chemist and was employed as a Research Chemist and Forensic Scientist (Criminalist). Dr. Lenton-Gary left corporate America to pursue a career in education and became very active in her community. She later received her master’s degree in Sociology from Prairie View A&M University of Texas and doctorate in Christian Counseling from Newburgh Theological Seminary.

As a member of the city council, Dr. Lenton-Gary created a Youth Council in her district, which provided high school students with summer jobs. Her passion and willingness to serve others afforded Dr. Lenton-Gary to be recognized by “Who’s Who Among Professional Women”. She has been active in many organizations and is a member of Alpha Kappa Alpha Sorority Incorporated. She was honored by her sorority as “A Woman of Change-Making a Difference in the Community”. She worships at the Fountain of Praise Church where she is an ordained Deaconess.

Dr. Lenton-Gary served on the Board of Directors of the Houston-Galveston Area Council and was a member of the Greater Houston Partnership. She served as an Ambassador for the American Heart Association and the American Stroke Association. As ambassador and stroke survivor, Dr. Lenton-Gary was a special guest on the talk show “Great Day Houston” to discuss heart health.