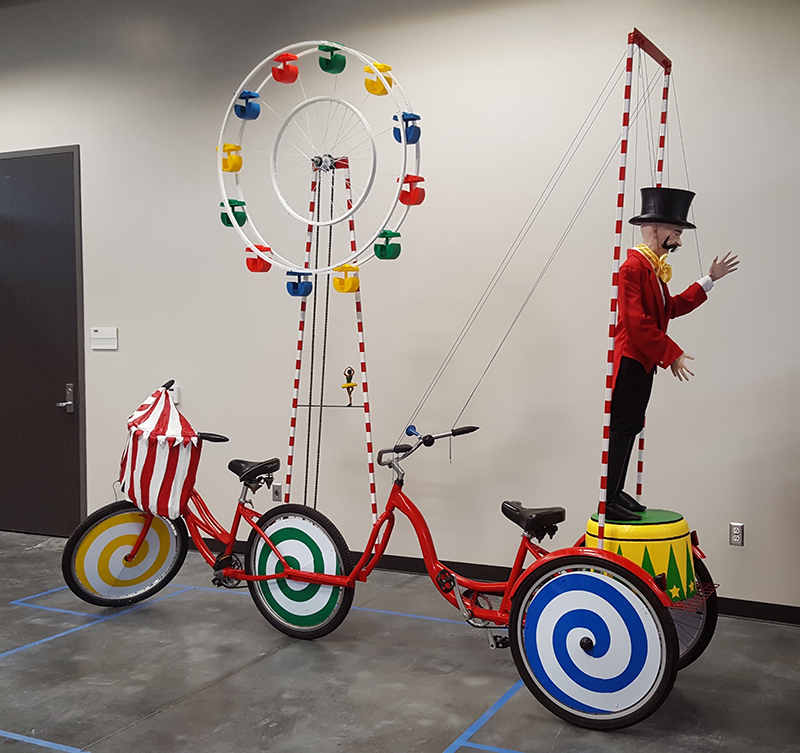 Ashley Hope, a Houston Community College (HCC) professor of studio art and art history is using cross-disciplinary teaching by having her classes enter the Houston Art Car Parade. Hope's art car cooperative class is a one-of-a-kind class that is offered only at HCC.

For the past six months, her classes have been working on designing their entries for the parade. The class is entering bicycles in the 2019 parade and an ambulance in 2020.

While Hope has been thinking of entering the parade for quite some time, her class was not a possibility until HCC’s West Houston Institute was built.

Providing the class with large spaces, technology and the tools they need to design their parade entries, the West Houston Institute is the first facility of its kind to integrate many critical components for innovation in a single space.

“My STEAM (Science, Tech, Engineering, Art, Math) team is the first class to participate in makerspace and has used every corner,” says Hope.

“Being the first regular class in the new makerspace, the art car team was the primary voice in assisting its development,” says Seth Moody, a student in Hope’s class. “I felt grateful to be seen fit for preparing the space for future students.”

Everyone is equal in a class that is "student-led, not professor-led," says Hope, adding that in the class, she "is a peer guiding them through the project. There is a magical camaraderie in each class because of the intimate group of five to six students."

“My introduction to the Houston Art Car Parade came from my classmate, Ricardo Rivera, in April 2018,” says Moody. “I was determined to attend the next year, but I could not have foreseen having the honor to be in the parade.”

While there was plenty of excitement surrounding the class, the uncertainty of a guaranteed space and timeline left the other departments hesitant to join.

"It was hard to get everyone together," says Hope. "Lots of people wanted to do it; I got some people because they overheard me talking, but it took time to convince everyone that it was actually going to happen."

Once Hope convinced everyone the class was happening, the STEAM team gained another partner whose contribution will be featured in the 2019 parade. The bicycles were provided by Free Wheels Houston, an organization that donates bikes to refugees and others who need a way to work and, or school.

“My most profound experience came upon lifting the ‘Ferris Wheel’ onto the bike,” says Moody. “After weeks of effort, I saw the art bike as it was designed and thought, ‘Wow! This is my bike!’”

Coleman College for Health Sciences gave Hope the ambulance, but it needed some work. That is when the automotive department stepped in to make the ambulance parade-ready.

"This is the first time our departments have worked together on a project," says Richard Hakemack, faculty program director of automotive technology. "The experience of preparing the ambulance for an art car was different from the instructors' perspective. They really dug into the project, and their classes were able to see the non-running ambulance come back to life.”

In addition, extra electrical and accessories on the ambulance were not typical of what is typically used in the program; which Hakemack says made it an interesting learning experience for the students. It also allowed the instructors to cover additional electrical activities outside the normal curriculum and garner student interest in that area of repair.

While an ambulance and a bike have their differences, the parade accepts anything on wheels, such as unicycles, lawnmowers, cars and go-carts.

Although this is HCC’s first year participating in the parade, the event started in 1988 with a 40-car parade seen by 2,000 people. Today, the parade is a three-day celebration with more than 250 vehicles from 23 states, Canada and Mexico. The audience has also grown in numbers to more than 250,000 attendees.

"The number of school entries increases each year," says Kat Mims, The Orange Show Foundation. Its Center for Visionary Arts has been the producer of The Houston Art Car Parade for 25 years.

While Hope and her students have not come up with a design for the ambulance yet, she does have two of her own requirements.

"The ambulance has to be well designed, by not looking thrown together, but appearing almost Hollywood like," says Hope.

The second requirement is to celebrate HCC. The class will use symbols and emblems to represent the different parts that make HCC whole and complete the art piece.