HCC student shoots for the stars with NASA space program 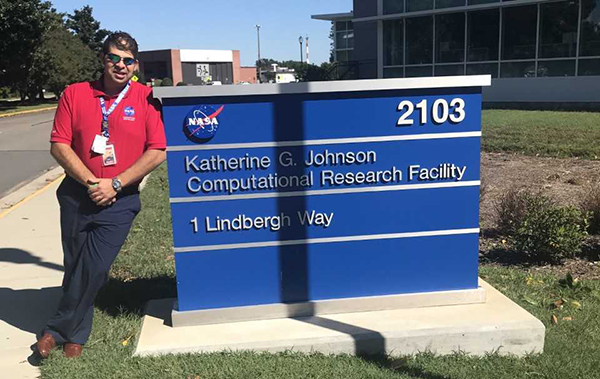 It’s not uncommon for a child to want to grow up and become an astronaut. It’s an admirable and romanticized goal to have that desire to “slip the surly bonds of earth” and fly into space, but it takes more than desire. There’s a lot of study and discipline that goes into that profession, as well as any of the many careers associated with space exploration.

HCC student Mauricio (Mo) Alvarez learned this firsthand when he participated in the NASA National Community College Aerospace Scholars (NCAS) program. Mo, a Tomball native, is an engineering student who completed the five-week NCAS course and then became one of a handful of students nationwide selected for the NASA program at the Langley Research Center in Virginia.

Alvarez was one of those kids who was always fascinated with anything relating to flight, space and NASA, so becoming a part of this program was even more than a dream come true.

“Nothing in my dreams compared to actually participating in this program,” he said. “When I walked down those halls, nothing compared to the things I saw, what I experienced or the people I met.”
Students were broken up into four teams during the program — blue, red, gold and green — that represented fictitious companies vying to earn a Mars exploration contract with NASA. Team members had to divvy up roles and responsibilities, develop and test a prototype rover, manage a budget, and come up with a plan for communications and outreach.

In addition there was coursework the students had to study. For Alvarez, learning all things NASA has been a hobby for him, so it didn’t seem like work at all.

“Although I’ve always had an interest in and studied everything NASA-related, I still learned a lot through the program, especially about what goes on behind the scenes,” he said. “I had to watch a lot of YouTube videos and PowerPoint presentations, as well as read a lot of articles and then I took quizzes. I think I filled an entire notebook worth of notes just from the things I watched and read while I was there.”

Alvarez said one of the highlights of his time at Langley was being in the Katherine G. Johnson Computational Research Facility. He said it was an honor to be in the same spot where Johnson, one of the subjects of the feature film “Hidden Figures,” once stood.

“That was a really big deal for me in the sense of being able to see someone accomplish so much through such adversity,” he said. “These African-American women who were the subject of that film made such vital contributions and were such a crucial part of those missions, and it’s only until recently that their story was told.”

Alvarez left the program even more motivated to continue to pursue his dream and as he looks toward the future, he says the sky is the limit.

“I would love to be a lead aerospace engineer, project manager, or project lead working the next big spacecraft or structure for the space station,” he said. “I want to be involved with a crazy huge project with some unreal timeline and get it done with flying colors.”