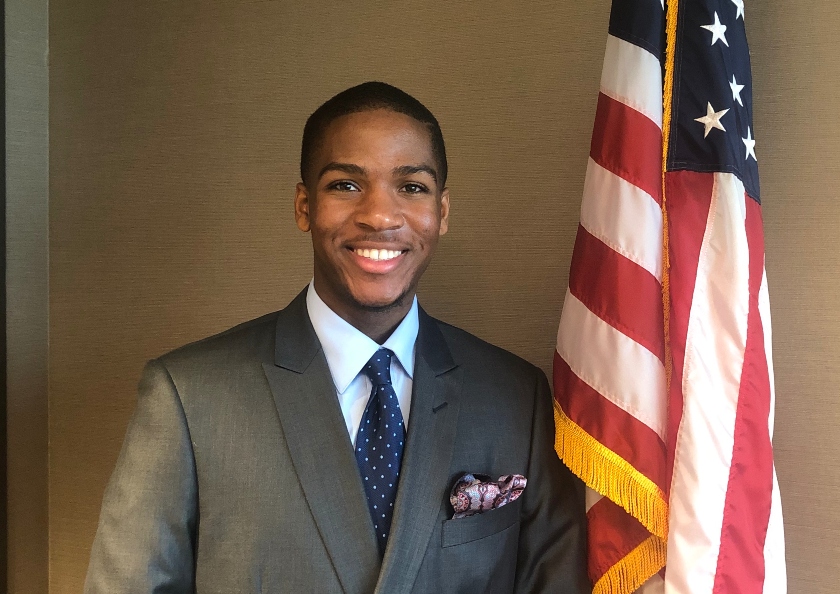 A leader, a college student, the president of the HCC student government association (SGA), the vice president of the United Student Council (USC), and a friend, son, and brother — Corey Glover excels on every level.

He was born and raised in Missouri City and attended school in the Fort Bend ISD and graduated from Elkins High School. In high school, Corey was active as a member of the Elkins High basketball team, student council, Future Farmers of America (FFA) — you name it and he was part of it.

He knew that when he graduated from high school, he was going to look at an affordable option for college, and Houston Community College was the best option.

The son of Michel and Roy Glover, Corey has two brothers, Roy and Koy. Born the middle child, Corey was always the mediator, the typical middle child trying to fit in between the big brother and little brother to get noticed!

For more than 30 years his family called Missouri city home.

His parents are his role models. “Dad is a deputy sheriff for the Harris County Sheriff's department, and he's in the crime scene division, and he's done that for over 20 years,” said Corey. “And my mom is a pharmaceutical investigational consultant. So, basically she has her own business where she monitors pharmaceutical drugs and the effects on the patients during the trial stage of those drugs.”

Corey’s parents instilled in him a passion for people and helping people. His career goal is to be a city manager where he feels he can help people in his community.

Corey is currently a sophomore political science major at Houston Community College. He’s hoping to go to the University of Houston, or Texas Southern University (TSU),” said Corey. “It honestly comes down to how much each of those schools offer me in scholarships. So, I'm hopeful that will happen. I would love to go to both schools and maybe someday I will have the opportunity to do that by enrolling in a bachelor’s and then a master’s degree program.

Corey is willing to go to school or work anywhere. He’s learned very quickly that if you want to excel faster in your career path, you have to be willing to move around. So, he does not mind moving.

“HCC was not exactly my first pick,” said Corey. “There was a lot of pressure on me — being so active in high school — to go to a four-year college, and many people told me that HCC wouldn't be a good option for me because I wouldn't have the college experience, and I wouldn't be able to, I guess, reach my full potential as a student going to a community college versus going to a four year school. So, when I actually got involved at HCC the first thing I did, after registering for classes, was walk up to the front desk of my college and asked to be directed to the student government association.”

Once, Corey joined the student government association, everything else simply fell into place. “I've been able to accomplish my dreams,” said Corey. “Things I never thought I would accomplish — I've done it here at HCC.”

“At HCC, the quality of our professors is amazing,” said Corey. “The courses are rigorous. You have to apply yourself and put effort into it. But just the student leadership positions that are offered on HCC’s campus add another dimension to the college experience. People have told me for years, ‘community colleges will not give you a college experience.’ I don’t agree—just step out and get involved, and you're able to enjoy the campus events that go on and actually be a part of the process of organizing those events. I say create your own amazing college experience by stepping out and taking chances.”

Corey says that he honestly was not qualified for some of the positions he had his first year of college. But again, he learned on the job and along the way. “You can learn on the job — you have the opportunity,” said Corey. “That's the good thing about a community college—you have people in these positions and you're not alone. And again, you don't have to be perfect or have all these qualifications to get involved at our college.

Corey goes on to say that all of the staff and faculty he’s ever met at HCC have always been supportive of anything that the student government, or any student organization, wants to push. “It's just a matter of reaching out to them and getting in touch with them for guidance,” said Corey. “The faculty and staff have been very helpful and very generous during my time here. HCC is a place where you can come and accomplish your dreams. It just really is.”