HCC machining student aims for the top in manufacturing field 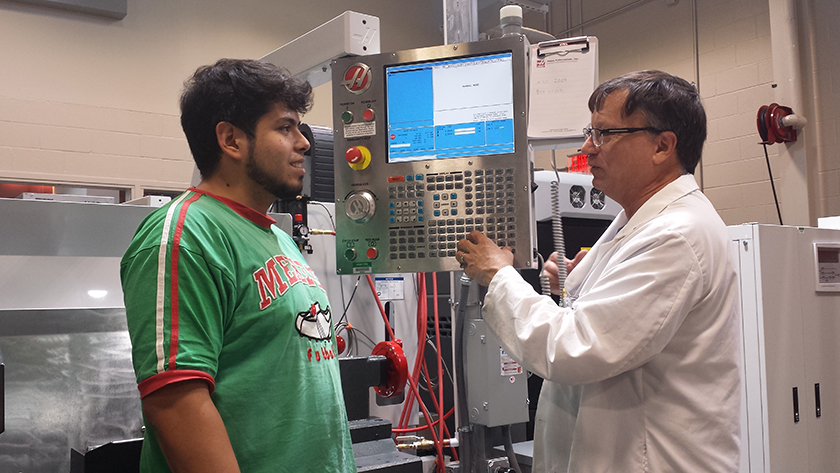 When the going gets tough, the tough get going.

Just ask Guillermo Huerta, who has re-enrolled in classes at Houston Community College after dropping out five years ago on a whim. Now, he’s laser focused with his eyes on the prize – earning an Associate of Arts degree, attending a four-year college and later owning and operating his own machine shop.

Returning to college is a major accomplishment for Huerta, who is now studying basic electrical theory and CNC (computer numerically controlled turning center) at HCC Stafford. He immigrated to the U.S. from Mexico as a boy in 1999 with his mother who works as a seamstress. His step-father is metal heat treat specialist.

“I was 19 when I started working at a metal shop just sweeping up discarded parts and cleaning the restrooms,” said Huerta. “I got laid off from there in 2014 and later on the shop closed down. So I my took mom’s advice to enroll in computer classes at HCC, but it wasn’t the right fit,” he said.

“After three weeks I dropped out. It wasn’t my thing standing in front of a computer all day,” Huerta said. “At the time I was too immature. I was working and making money and making bad decisions. Life kept going on.”

Huerta landed a retail sales job and worked about a year when the machine shop reopened. He returned to his old job as a sweeper, but in a few months he also learned how to perform parts inspections.

The machine shop underwent yet another round of layoffs. When the owners began rehiring they were looking for machinists, skills Huerta had not attained. But his luck was about to turn for the best.

“My uncle called and asked me if I wanted to come to Katy to learn how to become a machinist, and of course I said yes,” Huerta said. “He taught me how to operate the lathe and mill machines.”

Armed with his newfound skills, he began making calls to Houston-area machine shops for a machinist job, but his leads kept growing cold. “I took some tests at some companies but I could never get any good scores. So I started doing research on what I could start learning and it led me back to HCC.”

Today, Huerta holds down a full-time machine shop job while enrolled in machining classes at HCC Stafford. This time around, he said he’s energized and committed to learning everything he needs to land a high-paying machine shop job. Now, he’s learning how to read blueprints and to run the manufacturing machines among other skills.

Going to school while working “is really difficult because I’m working six days a week on the night shift,” he said. “My shift is from 6 p.m. to 6 a.m., Monday through Saturday and sometimes on Sunday. Classes end around 4 o’clock then I’ll sleep maybe two hours before I head to work.”

If all goes as planned, Huerta hopes to graduate this fall with an AAS in manufacturing engineering.

“I one day want to have my own machine shop, but I got to take it one step at a time,” he said. “I want to someday create a product using manufacturing equipment and to buy my own machines. I’m saving for that right now.”

Huerta credits his instructors with keeping him focused on his studies, and praised Dean Ritu Raju of the HCC Advanced Manufacturing Center of Excellence (COE) for being his academic anchor.

“He is entrepreneurial, very hard-working and thoughtful in his feedback about the program and his experiences,” Raju said. “He spent time in our Fab Lab learning 3D printing and has an amazing capacity to learn. Those are things that really impressed me.”

Raju said she has extended an invitation for Huerta to return to the Advanced Manufacturing COE to share his experiences with the students.

“We want our students to be invested in our program because then they help us bring the program forward,” she said. “We are encouraging all of our successful students to come back to tutor and mentor. Those kinds of student engagements are so valuable.”

Huerta said he’s excited about the possibilities in the field and that he has no plans to turn back now.

“I’m going to try at least,” he said. “You don’t know if you’re going to fail until you try. So I’m going to give it my all. I can see the end goal and I’m going to reach it.”