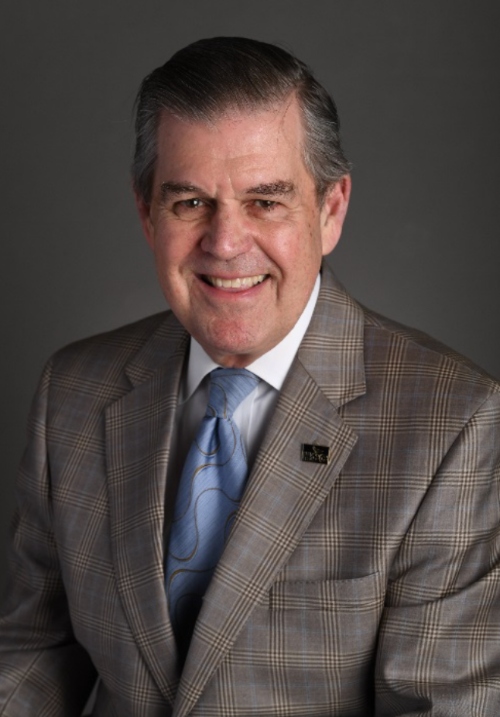 As Houston Community College prepares to celebrate its 50th anniversary in 2021, this year we celebrate another significant milestone in HCC history. Dr. Zachary Hodges, president of HCC’s Northwest College, celebrates his 25th year as HCC Northwest College president. Hodges has approached his role as president with a unique sense of humility and servant leadership. He has never had a personal parking space, he has had the same office with the same furniture since 1995, and back in the early days, you might have seen him with his kids in his office while he was working. These days, when he is not in a slew of meetings, it is not unusual to find him walking through the halls, talking to students and staff, and if he sees a piece of trash on the floor, he will pick it up.

In reflecting on his tenure as president, Hodges said he considers HCC as family. He has had that same family approach to his position from day one and he attributes that approach to his longevity.

“I don’t ask anyone to do anything that I wouldn’t do, and I have a fundamental belief that everyone deserves respect,” he said. “I respect everyone who works for us, part-time people, custodians, contract people, faculty and staff. I view my fellow employees as colleagues and friends.”

Hodges’ journey on the road to college president was not a straight path. It took many interesting twists and turns. The journey began in graduate school; while working on his doctorate some of his fellow grad students spoke highly of Houston. He applied and interviewed for a position at Houston Community College as a counselor and in June 1976 started out as the first campus-based counselor.

“We had other counselors who worked out of our administrative offices on Waugh Drive. We were opening our campus in Cy-Fair ISD that fall, so for the summer I went to the Central College to work in health careers. Then I transferred out to our Cy-Fair campus as the counselor for our first day facility at HCC, and worked there for 10 years.”

From there Hodges moved to a dual position of counselor and campus manager, then became a campus director. The chancellor at the time moved Hodges to the position of the campus director at the Westchester campus in Spring Branch ISD. Hodges notes that all of this was at a time when HCC was still centralized.

As a president, Hodges has always been known for his innovation and thinking outside the box, as well as his connection with the community. Building relationships both internally and externally is something that has always been a vital part of his work at HCC. It is something that started back in 1978 when he decided to begin working with Katy High School to develop dual credit courses, which, as it turns out, was not exactly in his job description.

“I probably didn’t have any business out there doing that, but I’ve always been naturally curious in looking for opportunities.” Building relationships is something I’ve always done well, and I’ve always tried to be involved in the community,” he said. “So when the time came for me to be selected as acting president, it was the community who wrote letters in my support. I think that was the main reason I got selected, because I was the one the community wanted.”

Successfully navigating through the internal community as college president has also proven to be something that came naturally for Hodges. He has always done well working with the faculty, staff, board members, and the various chancellors. Hodges attributes this to his ability to ‘manage up well.’

“I had a pretty clear understanding of what every chancellor’s expectations were and what they wanted me to do. I always felt like my job was to make them look good,” he said. “I really do believe every chancellor we’ve had had a fundamental respect for me and felt like I had their back and fully supported them. Plus, we’ve had some great HCC board members who have always worked well with me.”

When asked about the secret of his success, he says there is no secret at all. Hodges attributes much of it to the corporate culture he has cultivated as well as the people he works with. He has hired talented people and created an environment in which they can thrive and grow.

“From the beginning I hired great people. I always felt like I should hire people who are smart or smarter than I am, who are talented, and who really want to work hard. I also knew that faculty were most important,” he said.  “When I interviewed faculty, I would always tell them, ‘I don’t care what your passion is, just as long as you have one because whatever your passion is, it’s going to benefit the college.’”

He also gives a great deal of credit to his Executive Assistant Pamela Dake who he says is the embodiment of grace and professionalism.

“Pam is so gracious and helpful to everyone who comes in contact with her. She has that same kind of friendliness and professional approach to working with people that I have,” he said. “She’s been with me forever. She was my secretary when I was dean of students and then went to work downtown. I had the chance to hire her back about 20 years ago and she’s been with me ever since.”

Additional keys to Hodges’ success have been his honesty, transparency and accessibility. Sure, there have been bumps in the road, and hits and misses during the years, but having a good team of people who place confidence in his leadership has made all the difference.

“I think a good definition of a college president is when you mess up, people give you the benefit of the doubt,” he muses. “I think people see all sides of me. They see my flaws, my strengths, maybe some weaknesses or things I may not do right, but at the same time they don’t lose confidence in me. To me, that’s integrity.”

In the end, Hodges is most proud of the accomplishments over the years. Northwest College currently partners with Texas A&M, U of H, and UT Tyler engineering programs, and is home to The Glenda and David Regenbaum Center for Entrepreneurship at Northwest College, the Goldman Sachs 10,000 Small Businesses Program, and The West Houston Institute.

“The West Houston Institute is the innovation center for HCC. I fought for that name. That was an idea and vision I had, and in hiring Dr. Butch Herod and his team, they took it to an even higher level than I could have ever imagined,” he said. “We also host a city-wide business plan competition and now I have the Dr. Zachary Hodges Engineering Scholarship (contributions welcome). These are all ideas I had in which I am extremely proud.”

His next big idea is developing the new Katy campus. “This will be a new model for higher education based on active learning and student engagement,” he said. “I always want HCC to be on the leading edge of innovation in the country.”

In the end, Hodges looks back on his years at HCC proudly because he can truly say he has left a legacy. At the same time, he feels there is more work to do, which is why the journey is not over, it still continues. He is not planning on going anywhere because this is not just a job, for him it is a calling.

“I’ve had opportunities for other jobs over the years. I’ve turned down job offers but stayed at HCC because I’m really invested in this community, why would I want to leave? We’re doing meaningful work that makes a difference,” he said “There’s a saying that if you plant a tree and stay there long enough it will bear fruit. I’m proud to say I’ve been able to do that.”