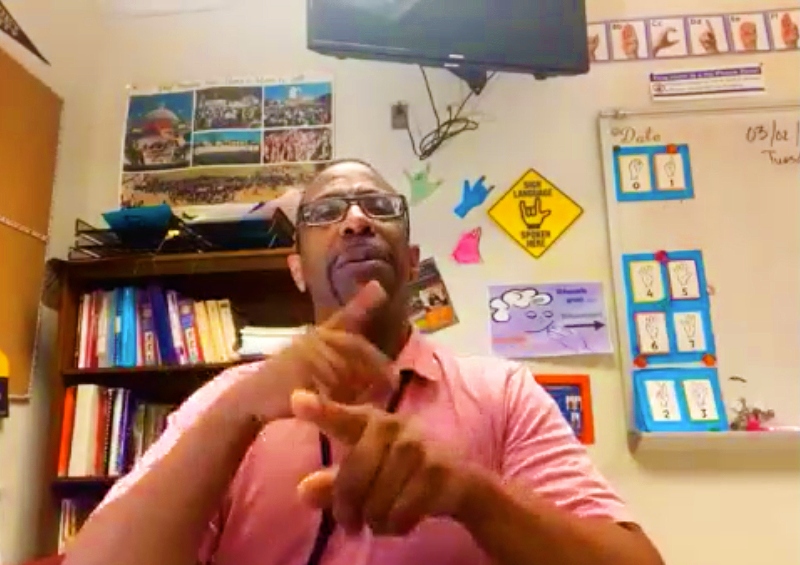 As a student at Gallaudet University, the only liberal arts college for the deaf in the world, Terold Gallien awakened to the idea of bridging the gulf between the deaf and hearing communities.

Gallien’s journey as a deaf person has equipped him with a unique perspective on life, which he shares with his American Sign Language (ASL) students at Houston Community College. Life is about being open-minded to embrace new culture and experiences and to be amenable to change, he said.

For hearing students, it can be difficult to change their English Language-based pattern of thinking to one based on nonverbal signing.

“That’s one of the struggles most students have,” he said through ASL interpreter Robert Helms. “It takes some time to actually comprehend it. But when they do you can see that ‘snap’ that happens.”

That “snap” allows students to begin to develop an understanding of not just ASL as a language but as a culture.

“It’s rewarding to see students improve their command of sign language,” Gallien said. “Seeing them able to go out into the world and talk to other deaf people makes me so proud. It’s like the birds leaving the nest.”

While attending Gallaudet University in Washington, D.C., in 1988, Gallien joined fellow students to protest the selection of a hearing president to lead the university, which had never hired a deaf person for the top job. The college’s alumni, faculty and staff also joined in the movement for change.

After a week of outrage and protests, the newly hired president stepped down and was replaced by I. King Jordan who is deaf. The movement became known as Deaf President Now.

“That’s where I started getting more involved in the need for deaf representation,” Gallien said.

During his senior year at Gallaudet, Gallien completed a three-month internship as a production assistant with Black Entertainment Television. After graduating from Gallaudet in 1992 with a bachelor’s degree in Communications Studies, he enrolled in the graduate program at Lamar University in Beaumont.

Throughout his college years, Gallien sought opportunities to teach sign language to hearing friends and people from organizations and the community.

"I was very much enriched by those experiences, and I knew from early on I would always enjoy teaching hearing people ASL. I love helping others," he said.

With a master’s degree in Deaf Studies/Deaf Education from Lamar in 2001, he headed back to Washington, D.C. But his fond memories of the Lone Star State were never far from mind.

The HCC ASL program prepares students for careers as an interpreter, said Danielle Stagg, division chair of Speech, Communication and ASL at HCC. While most of the ASL classes are held at HCC Central, two years ago the program was expanded to HCC Southwest.

*I wanted to learn sign language myself so that I could interact better with the instructors,” Stagg said. “Sign language is a beautiful language to master, and yes, it is very difficult to master.”

Students enroll in ASL for various reasons, Gallien said. Some may have a deaf person in the family, or they sign up to fulfill a foreign language requirement. Yet others pursue ASL in order to become an interpreter.

Through his commitment and caring for students, Gallien has become an integral part of the college’s ASL program, Stagg said.

“I’ve worked with Terold for the past two years and he is a pleasure to be around,” she said. “He is engaging, he cares about the students and he is dedicated to the deaf community.”